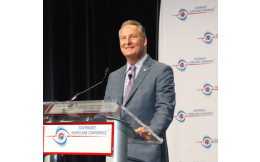 Bill Johnson is the former Director of the Palm Beach County Division of Emergency Management since 2010, retiring in 2021. During his tenure, he guided the County in its response to Tropical Storm Isaac in September 2012 when storm bands dumped over 25 billion gallons or 18 inches of rain on the western portions of the County. His Division staff has also redrafted and exercised the County’s numerous disaster response and recovery plans. Prior to Palm Beach County, Bill worked for two years as the Assistant Director of the Broward County Emergency Management Division and three years in the private sector as the Director of the Emergency Management Program for the Florida market for the URS Corporation. Before that, he served as the Assistant Director for the Miami‐Dade County Office of Emergency Management for nearly 11 years. Bill has been deployed to several major disasters including to New York City to assist with incident command after the 9/11 attacks on America. Before his emergency management career, he worked in Miami‐Dade County’s trauma agency, worked as a flight nurse‐medic, and as the director of a Level II trauma center in Wisconsin. He is a registered nurse, certified paramedic, and certified emergency manager.