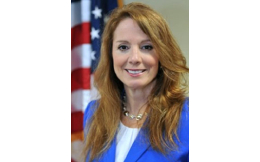 Gracia B. Szczech is the Regional Administrator for the Federal Emergency Management Agency (FEMA) Region 4. Appointed in February 2015, she leads and coordinates all activities in support of FEMA’s mission with state and tribal partners in Alabama, Florida, Georgia, Kentucky, Mississippi, North Carolina, South Carolina, and Tennessee.

Since her appointment, Szczech has overseen FEMA operations for all presidentially declared major disasters in Region 4, which account for roughly a quarter of all declarations in the United States and its territories. She has also initiated a variety of programs and events to improve cooperation and coordination between FEMA and its stakeholders in order to streamline disaster response and recovery operations. These include the Partners in Emergency Management Workshops, Southeast Private-Public Partners Summits, and Southeast Radiological Emergency Preparedness Workshops, as well as numerous Individual and Community Preparedness campaigns and community outreach seminars.

Szczech joined FEMA in 2000 as one of the first members of the new Federal Coordinating Officer (FCO) cadre. She earned the designation of Type I FCO, held by only four people and signifying FEMA’s highest level of emergency management expertise. She has served as an FCO on numerous presidentially declared disasters.

Before joining FEMA, Szczech spent four years with the Georgia Emergency Management Agency (GEMA) as Assistant Director of Operations, managing contingency planning, as well as radiological emergency and hurricane preparedness. She began her career in disaster response with the American Red Cross in Savannah, GA.

Szczech completed the Capstone General and Flag Officer course in 2017, an advanced military leadership training program offered to Capstone Fellows at the National Defense University. She has also completed the Homeland Security Executive Leaders Program at the Naval Postgraduate School – Center for Homeland Defense and Security, and the National Preparedness Leadership Initiative’s Executive Education Program at Harvard University’s Kennedy School of Government. Szczech is a Certified Emergency Manager®, designated by the International Association of Emergency Managers.