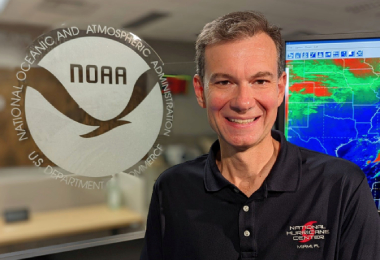 Jamie Rhome is the Acting Director of NOAA’s National Hurricane Center (NHC) in Miami, a role he has filled since June 2022. Previous to his appointment as Acting Director, Mr. Rhome was the NHC Deputy Director.

Mr. Rhome received both his Bachelor of Science degree and Master of Science degree in meteorology from North Carolina State University (1999, 2002). He joined the National Hurricane Center in 1999 as a marine forecaster in the Tropical Analysis and Forecast Branch. He became a hurricane specialist in 2006 and was selected to lead NHC’s Storm Surge program in 2008. He was also selected for a temporary assignment to the White House’s Office of Science and Technology Policy in 2008/2009 where he served as a scientific policy analyst within the Presidents George W. Bush and Barack Obama administrations.

As a Storm Surge Specialist and the Team Lead, he served as a subject matter expert on storm surge and coastal inundation for the National Weather Service’s hurricane program. He was the NOAA representative for the tri-agency (NOAA, FEMA, Army Corp. of Engineers) National Hurricane Program (NHP). He oversaw the NHC’s Storm Surge Unit, which produces official storm surge forecasts during tropical cyclone threats to the United States, supports the Nation’s hurricane warning program, and facilitates post-storm response and recovery efforts. During the offseason, he led storm surge research and development activities at NHC including updates to the storm surge modeling system, development of new products, and post-storm analysis and validation studies.