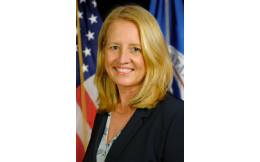 Ms. Deanne Criswell was unanimously confirmed by the Senate on April 22, 2021 as the 12th Administrator of the Federal Emergency Management Agency (FEMA). Ms. Criswell is the first woman confirmed to serve as the Administrator, where she leads the nations efforts in helping people before, during, and after disasters. She brings with her an extensive career in emergency management with over 27 years of experience at all levels of government and the private sector.

Prior to her appointment, Ms. Criswell served as the Commissioner of the New York City Emergency Management Department from 2019 to 2021, where she was responsible for coordinating citywide emergency planning and response for all emergencies. One of her most significant accomplishments was leading the coordination of the City’s response to the COVID-19 pandemic to include preventing the collapse of the healthcare system, making sure no New Yorker went hungry, establishing a first of its kind non-congregate sheltering program, and supporting the country’s largest mass fatality program.

Ms. Criswell began her career in emergency management in Aurora, Colorado, where she led strategic change in the city’s emergency and disaster planning. During her tenure, Ms. Criswell coordinated transitional housing and family reunification efforts in response to receiving evacuees during the response to Hurricane Katrina. She previously served at FEMA as the leader of one of the Agency’s National Incident Management Assistance Teams (IMAT) and as a Federal Coordinating Officer. In this role, Ms. Criswell was the primary Federal representative responsible for leading the agency’s response to and recovery from emergencies and major disasters, from severe flooding in North Dakota to hurricanes in South Carolina to fires in Colorado. She also spent two years as an executive in the private sector, providing exceptional technical expertise and the experience necessary to help her clients achieve their critical missions.

Ms. Criswell also proudly served 21 years in the Colorado Air National Guard. She is a veteran of two oversees tours to include as a fire officer in Kuwait immediately following the attacks of September 11, 2001, and to Qatar in support of Operation Enduring Freedom in 2010 where she advised senior leadership on fire protection requirements for new and existing military bases in Afghanistan and Iraq.

Ms. Criswell holds a Bachelor of Science from Colorado State University, a Master of Public Administration from the University of Colorado – Denver, and a Master of Arts in Security Studies from the Naval Postgraduate School, Center for Homeland Defense and Security.