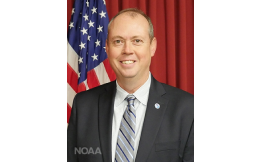 Ken Graham is the Director of the National Hurricane Center. He received a Bachelor’s of Atmospheric Science Degree at the University of Arizona, with a minor in Physics and Mathematics. He attended Mississippi State University to teach physics and earned a Master of Science Degree in Geosciences. While in Mississippi, he was a television meteorologist for CBS and an agricultural meteorologist for Mississippi Network Radio.

Ken began his National Weather Service career as an Intern Forecaster in New Orleans in 1994. His career took him to agency’s Southern Region Headquarters in Fort Worth, Texas as the Marine and Public Program Manager during National Weather Service Modernization in the early 1990s. He became the Meteorologist-in-Charge at NWS forecast offices in Corpus Christi TX, Birmingham, AL, and New Orleans/Baton Rouge, LA. While in Birmingham from 2001 to 2005, his office won Department of Commerce medals each year for innovative services like Instant Messaging with television stations during critical events such as the Veteran’s Day Tornado Outbreak.

Ken was part of a team creating “Building Leaders for a Solid Tomorrow” which is still training leaders after 18 years. He served as Systems Operations Chief at Southern Region Headquarters where he won a Bronze Medal for leading a team to make critical repairs in New Orleans following Hurricane Katrina. He moved to Washington D.C. to be Chief of Meteorological Services where he worked closely with partners to improve services and briefed Congressional Committees.

As the Meteorologist-in-Charge in New Orleans, his office won the Department of Commerce Bronze medal for innovative services during Hurricane Gustav and Ike and the National Weather Association’s Operational Meteorology Award and Department of Commerce Gold Medal for Decision Support Service during the Deepwater Horizon oil spill. Ken received the National Weather Museum’s Weather Hero Award for 2010. He has extensive experience working directly with emergency managers during numerous high impact events including nearly two decades along the coast. Ken has deployed to emergency operations centers, provided Impact Based Decision Support Briefings for emergency managers and elected officials, and delivered numerous training sessions and exercises related to tropical weather.

Ken led the effort to provide more than 4,300 Spot Forecasts and Emergency Response Meteorologist deployments for more than five months to support the Federal response to the worst oil spill in the nation’s history. He led the service assessment for the Pacific Basin Tsunami in Samoa. He served twice as Chairman of the New Orleans Federal Executive Board representing more than 26,000 Federal employees and was twice the New Orleans Combined Federal Campaign Chairman raising millions for charity. Ken was elected a board member of the Louisiana Emergency Preparedness Association, member of the National Weather Association, and American Meteorological Society. He is also a licensed HAM Radio Operator.